Hyun Min (played by Super Junior’s Siwon) does fake volunteer work to manage the situation after he has caused controversy by driving under the influence.

In the episode of SBS TV’s drama series The King of Dramas that aired on November 27, Hyun Min does volunteer work at an orphanage to improve his image.

END_OF_DOCUMENT_TOKEN_TO_BE_REPLACED

[NEWS]12.11.27 Super Junior’s Siwon attends a press interview for his new drama series on The King of Dramas 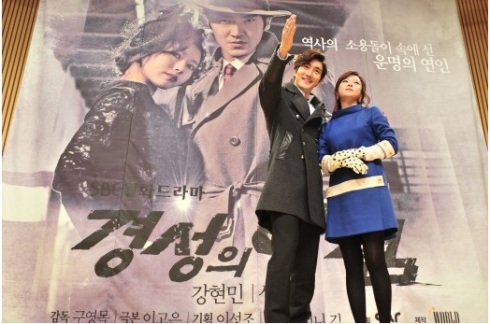 In the eighth episode of the series, which will air on November 27, a press interview for a new drama series, written by Go Eun (played by Jung Ryeo Won) and starring Hyun Min (played by Super Junior’s Siwon) and Min Ah (played by Oh Ji Eun), is held.

END_OF_DOCUMENT_TOKEN_TO_BE_REPLACED

[NEWS]12.11.27 Kang Hyun Min gets in an accident while driving drunk ‘The King of Drama’

Kang Hyun Min (played by Super Junior’s Choi Siwon) uses his mother’s visit to the emergency room of a hostpital to manipulate public opinion towards him.

END_OF_DOCUMENT_TOKEN_TO_BE_REPLACED

Credits to. www.sbs.co.kr | Shared by. Blue★Princez @ SJ-WORLD.NET
TAKE OUT WITH FULL AND PROPER CREDITS. DO NOT HOTLINK.

[NEWS] 12.11.19 Super Junior’s Siwon gives an interview on a street on The King of Dramas

Super Junior’s Siwon recently appeared on a street near Hong Ik University to give an interview toMidnight Entertainment. However, that wasn’t a real interview but a scene in SBS TV’s drama seriesThe King of Dramas.

In the series, Siwon appears as a popular celebrity who has a handsome face and an intelligent image. However, he’s actually very simple-minded and greedy.

To shoot the interviewing scene, Siwon appeared on a street near Hong Ik University.

As Siwon appeared on the street, lots of people swarmed to see him despite the cold weather. Siwon portrayed Hyun Min, a top celebrity who pretends to be polite and intelligent.

According to reports, some of people who saw Siwon on the street thought he was really giving an interview to Midnight Entertainment as the reporter Jo Young Goo, who makes a cameo appearance in the series, was also seen. The production team says, “This will be an interesting scene, which is also very realistic.”