Host Shin Dong Yeob of KBS 2TV’s Hellorecently consoled Super Junior’s Eunhyuk for having a hard time after a picture of himself and IU was released by mistake.

On the 100th episode of the show, which aired on November 26, Super Junior’s Eunhyuk, Shindong, and Sungmin appeared as guests and listened to people’s worries.

END_OF_DOCUMENT_TOKEN_TO_BE_REPLACED

Super Junior’s Eunhyuk, who recently had a hard time because of the picture of himself with IU, said he’s afraid of people’s attention.

On the episode of KBS 2TV’s Hello that aired on November 26 at 11:20 p.m., Super Junior’s Shindong, Sungmin, and Eunhyuk appeared as guests and listened to viewers’ worries.

END_OF_DOCUMENT_TOKEN_TO_BE_REPLACED

Singer Son Dam bi and Super Junior’s Eunhyuk were recently spotted measuring their shoulder width to find out which one of them has broader shoulders.

In a recent shooting for Strong Heart, Son created a stir as she stated, “I think I have broader shoulders than Eunhyuk.” People at the studio got up and began to measure their shoulder width to find out the truth.

Son has been swimming for over nine years and Eunhyuk who used to be called as “anchovy” claimed to have worked out for a while. People become more curious about their shoulder widths, and you can check out the results at 11:15 p.m. on November 20. 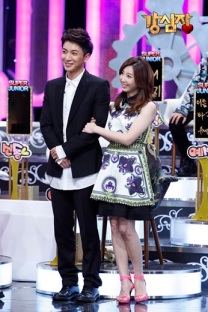 Super Junior’s Leeteuk will appear on SBS TV’s Kang Shim Jang as a guest with his family.

On November 13, the production team of Kang Shim Jang reported that Leeteuk’s family will appear on the special episode for Leeteuk of the show.

The episode was shot before Leeteuk entered the boot camp. Leeteuk’s mother and sister Park In Young will appear on the episode.

This is the second time for Park to appear on the show. She surprises everyone with her energetic dance performance.

According to reports, after Park’s performance, Leeteuk’s mother got laughs by saying, “It wasn’t perfect, but she did better than the last time.”

[NEWS]12.10.26 Leeteuk shows tears as he talks about his enlistment

Leeteuk was a guest on MBC Music‘s ‘All the K-Pop‘.

On the show, he talked about his upcoming enlistment, stating, “I’ll safely finish my army life and come back as a man.” He tried to be stoic, but couldn’t help but tear up when Boom and Shindong showed up. However, he got up immediately and managed to brighten up the  mood of the show again with his usual variety skills.

A few hours before the episode aired, Leeteuk tweeted, “I’m going to shave my hair now.. I thought of this song.. It was a song I sang a lot when I was little.. Shave your hair bald……. I only look good with my hair.. I’m ruined kekekekekekekekekekekekeke“.

END_OF_DOCUMENT_TOKEN_TO_BE_REPLACED

It is confirmed that Leeteuk will make one last appearance on “Star King” for entertainer Kang Ho Dong’s return onto the show. He will MC with Ho Dong one more time on the show before leaving to enlist in the army.

The episode will be filmed on October 29th and will air on November 10. Leeteuk will reveal his haircut and will be saying one last goodbye to all his fans.

Stay tuned for this memorable episode of “Star King.”

Recently, Super Junior’s Leeteuk has confessed that he had forged his report card when he was a student.

On July 15, the star participated in a shooting for KBS 2’s National Talk Show Hello which took place at the annex hall of KBS Yeouido building in Seoul.

A middle school girl appeared as a client of the show and shared her trouble. She said that her father stresses her out the most because he pushes her too hard on studying. When Leeteuk heard her issue, he revealed a secret story about his report card during his school days.

He said, “Once, I’ve forged my report card because I had to have my parents’ signature on it. I printed out some letters, cut them, and pasted them on top of bad grades. They still don’t know about it.”

On listening to his story, the emcees of the show joked. “Leeteuk has forged an official document!”

The episode also covers two other clients: a young woman in her twenties who is upset about her mother checking her purse and a female employee concerned about how to clean Gundam action figure of her boss. It airs on the 23rd of July.