Since Super Junior will release 4 new songs including ‘A-CHA’, which will be contained in the repackaged 5th album, through music websites such as Melon, Dosirak, Bugs, Naver, etc. on the 19th at 00:00 a.m., it is expected to receive an enthusiastic response from music fans.

The new song, ‘A-CHA,’ is a powerful dance music and type of electro house based on rock. It has easy melody and sophisticated rhythm. The song is expected to reveal different appeals from the existing songs of Super Junior and features the witty love story of Don Quixote who desperately tries to recapture his lover’s heart.

END_OF_DOCUMENT_TOKEN_TO_BE_REPLACED

Will boy band idol-and-actor Choi Si-won score a ratings success this time around?

After starring in two not-so-successful dramas, he is taking a third stab with a series that has been mired in controversy.

Then, delays in production led Eric to abandon ship and rumors abounded that “Poseidon” was sinking.

Fortunately, a new cast was unveiled months later, with Super Junior member Choi Si-won on board and U-Know no longer in the lead but nevertheless slated to make a cameo appearance.

After playing the lead in the less-than-successful SBS rom-com “Oh! My Lady,” actor Choi took a supporting role in the “IRIS” spin-off, SBS’ “ATHENA: Goddess of War.”

Despite a star-studded cast, including veteran actors Cha Seung-won and Jung Woo-sung, the action blockbuster failed to maintain high ratings during its 20-episode run.

Undeterred by his not-so-hot track record, Choi is going for yet another action-heavy thriller.

END_OF_DOCUMENT_TOKEN_TO_BE_REPLACED 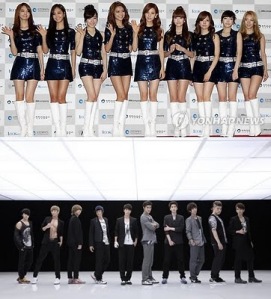 SNSD and Super Junior will be making an appearance on KBS 1TV’S ‘Love Request’ on September 17th.

Through the broadcast, SNSD and Super Junior will be promoting the ‘Blood Donation Campaign’ at the blood donation centre. The programme will also feature sad stories about an 11 year-old Cambodian girl who is suffering from a heart condition as well as a visually impaired Indonesian teenager who did not receive medical treatment.

A staff of the production crew said on September 16th, “Through this special broadcast, leaders of Hallyu, SNSD and Super Junior will be able to convey their gratitude towards their Asian fans who have shown so much love for them”.

SNSD and Super Juniors’ warmth could be witnessed on KBS 1TV’s special broadcast,’Love Request’ which will be aired on September 17th at 5.35pm KST.

Did Super Junior‘s Leeteuk and SISTAR‘s Hyorin share a kiss?

On the upcoming episode of “Super Junior and SISTAR’s Hello Baby“, the two tried to parody a popular CF.

They were trying out the famous kiss that Won Bin and Shin Min Ah did for a coffee commercial.

This ‘kiss scene’ with Leeteuk caps a special moment for Hyorin, who was also picked as the ‘first mom’ out of the four girls by baby Kyumin. As the first mom, Hyorin not only gets the kiss, but also a couple T-shirt with Kyumin, and some family pictures.

Although Hyorin is never nervous, she looked a little flustered for this kiss scene.

Check back to see what happened when the episode airs on September 16th.

Super Junior has announced that they’ll be making a music program comeback through September 23rd’s episode of ‘Music Bank‘!

As reported earlier, they’ll be releasing their follow-up song, “A-Cha“, from their repackaged album of the same name on the 19th.

To accomodate those fans who don’t want to own multiple copies of their “Mr. Simple” album, Super Junior will release the digital versions of their 4 new songs through music sites like Melon, Dosirak, Bugs, and Naver on that day.

“A-Cha” is a song about holding onto a lover who seems to be unsure about what she wants. It’s described to be a powerful dance track combining rock and electro house styles with an easy melody and sophisticated rhythm.

END_OF_DOCUMENT_TOKEN_TO_BE_REPLACED

The cast for “Poseidon” are praising Super Junior‘s Siwon.

On September 15th, at the premiere in Seoul for KBS’s new series, “Poseidon” Lee Si Young, Lee Sung Jae, Jung Woon Taek, Gil Yong Woo, and other actors/actresses on the cast were present and gave tremdonus praise for Siwon.

In the drama, Siwon plays corporal Kim Sun Woo, a former top marine special forces member that suffered demotion after a reckless investigation that lead to a loss of a teammate. Although this isn’t Siwon’s first rodeo as an actor, because he is from the music industry, the idol member tag precedes him.